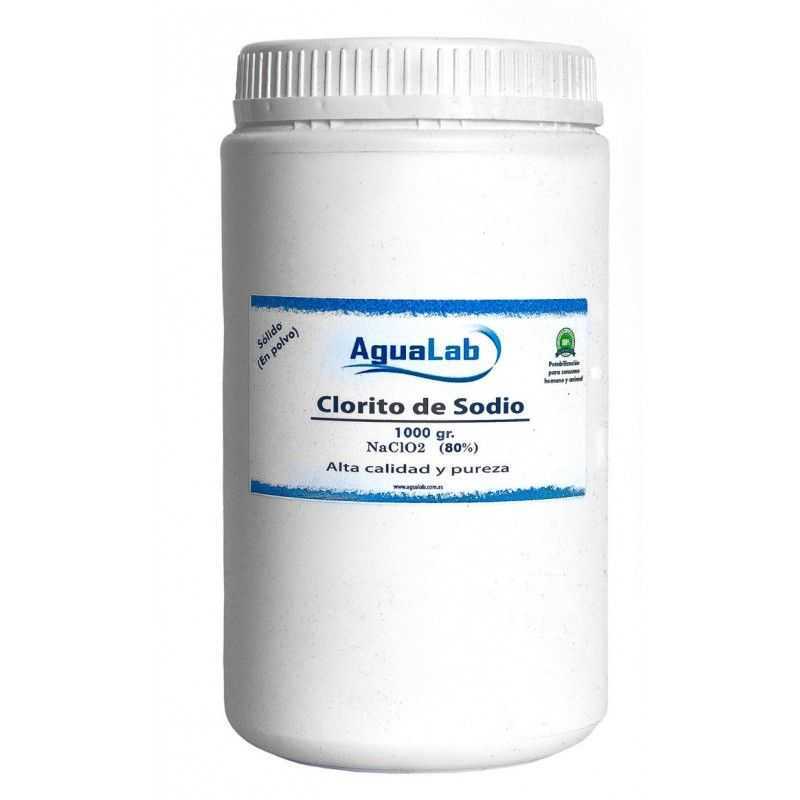 You will be able to receive your 1 kilo bottle of 80% sodium chlorite at an exceptional price and of the best quality.

Sodium Chlorite powder is a very useful substance, it has revolutionized the treatment of water thanks to the purification provided by its chemical composition, among other uses. It should be noted that sodium chlorite contributes to the optimization of various chemical and industrial processes that facilitate day-to-day life and improve people's quality of life.

For these reasons, if you want to know what other uses it has and how to manufacture it, keep reading because today we will teach you that and much more.

What are the uses?

Mostly, this substance is used to:

Whitening paper fibers, this use is mostly exploited by industries engaged in the treatment and production of paper on a large scale.

Disinfect and protect everything involved in the industrial processes of food and beverage production.

Reduce odors from the transformation of waste from a slaughterhouse.

Be used as reagents in a laboratory.

The treatment of residual and industrial waters.

How is sodium chlorite powder made?

The manufacture of this chemical powder is relatively simple because sodium chlorite is a direct result of sodium chlorate also known as NaClO3.

Firstly, chlorine dioxide or ClO2 is the product of a reduction of sodium chlorate in a fairly strong acidic substance, obtained through the use of a suitable reducing agent such as:

Subsequently, chlorine dioxide is absorbed by an alkaline substance which is reduced thanks to H2O2 hydrogen peroxide, resulting in sodium chlorite or sodium chlorite.

Safety precautions in the preparation and handling of sodium chlorite powder

This chemical deserves to take a series of precautions to be manufactured, handled and stored.

It is for this reason and due to the importance of its careful treatment that, next, we will show you a series of measures that you must take into account when you have a spilled accident, for example, as well as some of the regulations of security that you must keep in mind if you are going to work with sodium chlorite.

The first thing you should know before starting work are the dangers it can pose to you and your environment in the first place. Powdered sodium chlorite is a chemical that is harmful to health and is also extremely dangerous for the environment.

In addition to the above, if the substance is placed in contact with acids, it tends to release chlorine dioxide, which is an explosive and toxic gas.

This substance is also harmful if poured into aquatic environments, it is also highly harmful if ingested. Additionally, it can be irritating to the eyes and mucous membranes as well as to the skin.

Use the appropriate personal protective equipment

Now that you know the dangers of the chemical, you should locate the ideal PPE (Personal Protective Equipment) for handling the substance. Next, we will indicate what kind of protection you should use:

Respiratory protection: While handling sodium chlorite use a mask with filters for toxic gases and vapors. Other than that, it prevents aerosols or vapors from being generated as much as possible.

Hand protection: Use protective gloves made of nitrile rubber, this material is highly recommended because it is waterproof and has resistance to the chemical and the preparation you are carrying out that involves it.

In addition to the above, when you are going to handle sodium chlorite powder you must keep it away from any kind of food and drink, whether for humans or animals.

By the time you have finished your job or workday, immediately remove any clothing that you have used that is dirty or impregnated with the chemical, of course, always avoiding having any kind of contact with your eyes or skin.

What can I do if an accidental spillage of sodium chlorite powder occurs?

The main measures that you must use before handling the substance is to use the corresponding PPE (Personal Protective Equipment), in this way you will anticipate and adequately protect yourself from spilling.

Very happy with my purchase.
Thank you very much

They offer a fast reliable service. Had delivery in a few days.